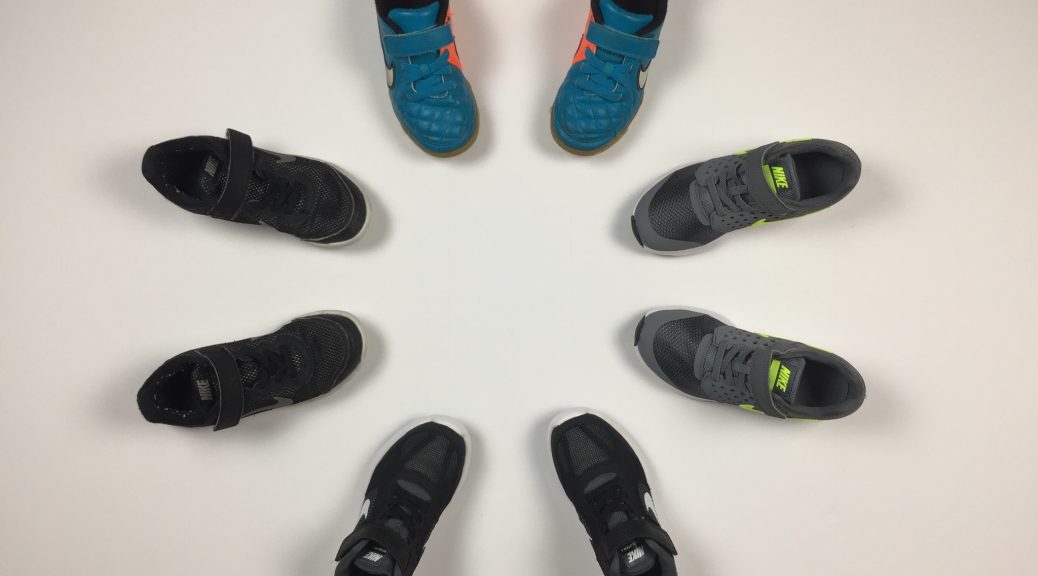 D didn’t used to be too particular about his clothes and shoes. With clothing, he still isn’t. Luckily he has a Mom who is very fashionable and runs a children’s consignment business so he’ll never have to worry about comfortable clothing that also looks fantastic. (Neither will I, which I appreciate.)

The exception to D’s willingness to be a four year old fashion icon is when it comes to his shoes. He’ll wear short sleeve shirts, long sleeve shirts, pants, shorts and all in varying materials and textures. He refuses to wear hats, but everything else, clothing-wise, he’s perfectly comfortable in. He’ll perform the occasional pant leg adjustment, but he’s not repulsed by any clothing and we mark that under the win column.

When it comes to his shoes he has to have the swoosh. If it’s not Nike, it’s not for D. Luckily, and thankfully for us he’s attached himself to a brand that doesn’t appear to be going anywhere anytime soon. We’re not necessarily brand loyal people, at all, but it’s very comforting to know that D’s preferred footwear will be available for the foreseeable future.

One of his last pair of shoes before rejecting everything but Nikes was coincidentally labeled the same name as D’s given name. A quick google search yields several results for shoes with this name, but his were boots. Kind of the opposite end of the spectrum from his current shoes.

Before the D boots, he wore blue sandals for an entire summer. The ease of sandals was really nice but it yielded an incredible amount of foot filth.

D currently has a blue and orange pair of Nikes as well as a black pair with white trim. They are the second pair of each that he’s owned with his prior pairs being a size smaller.

When we realized that he had an “ism” with his footwear, we initially tried to change things up so he wouldn’t get stuck in a rut. That didn’t go well. At all. We had a couple other (non Nike) pairs of shoes that we tried to get him to wear while getting ready to go to therapies in the morning. He’d see them and become rigid. We’d put his socks on and with the first approach of the different shoe he would start kicking his feet like mad. If we would manage to actually get a shoe on he would melt down until it was off and then he was fine.

We didn’t push this too much because we didn’t want him to reject shoes altogether or have this stress manifest itself in another way like a hunger strike. D has exercised his control a few times in a reactionary way. We stuck with his two pairs of Nikes and made it work.

When D began to approach the size limit of those pairs we were faced with a choice. Did we buy new, different shoes and fight through it and see what happened? Or, did we scour the internet to find the next size up of these exact same two pairs of shoes that had conveniently been discontinued. We hit the pavement on Ebay and about eighty dollars later we had two new pairs of shoes.

We are currently coming to the end of these size twelve shoes. D is four years old and has thankfully plateaued a little bit, growth-wise, but he is still sprouting like a weed. His feet have always been very Fred Flintstone-esque so we knew our time in these shoes was going to be very limited. Regardless, it crept up on us and here we are in the same position.

We currently have, in our possession, two brand new pairs of Nike shoes, Ozzie thirteen, and they are slightly different styles. We’re going to go for it, change it up, fight through it and see what happens. D has continued to develop, he has better communicative skills and stronger coping skills and we feel as though we can get through this upcoming change.

Some of our biggest challenges have risen from the most unexpected places. I suppose partially due to the very nature, had we expected them perhaps they wouldn’t be such a challenge… but this whole shoe thing has been a really interesting one.

D won’t wear boots so that means no outdoor activities in the winter (none of us care for these anyway) but also no letting D walk through snow that’s more than a dusting. Wet feet in the Minnesota winter coupled with a little boy who can’t or won’t tell us his feet are wet is not a good combination.

It means that we can’t just go and try on a new pair of shoes. We can’t go to Target and look through all the shoes and see if D likes them. We can’t ask him if they feel okay or if they pinch.

We have to order them and get them home to the place he is safe and comfortable. Then we introduce the shoes to him to examine them and just kind of have the shoes in his space for a bit. We might go through a few narratives about his new shoes. Talk through how his feet are growing and his current shoes won’t fit for much longer and finally attempt placing them on his feet.

It has pretty much been built in to our normal now, but all these things are little bullet points of mindfulness for us. It reminds me of leaving notes for the handful of times we’ve had a baby sitter in four years. They end up being at least a page of small print instructions on exactly how to do things so that D will function. It’s just things that we DO now. For someone walking in to the situation, how are they supposed to know that D has issues processing anything different than his blue and orange Nikes or his black Nikes with the white trim anywhere near his feet?

This is D. It’s who he is. He’s changing and growing through it and he’ll continue to surprise us as he always has.

In the grand scheme of things, this is not one of our major challenges. We have eating and feeding challenges that trump anything shoe-related. We have gone through several stages and phases that were so consuming, crushing, mentally and physically exhausting that shoes were so far off our radar as to be non existent. This is, however, another in the list of features that is not listed in “The Autism Handbook” every parent receives upon diagnosis.

If this next round of shoes doesn’t work, we’ll figure out something. That’s what we do. As much as I don’t feel like an adult, technically I am. As an adult, that’s what we do. We figure things out. And, as a parent to someone who can’t necessarily figure it out for himself, it’s my purpose to help.

We had our first breakthrough in D’s shoe saga today, and it was a good one!

This morning, as we were finishing up his OT session, we brought out his new shoes, as we do each session. We distracted him with an iPad spelling app and put his shoes on his feet…and they stayed on! Not happily, but they were on.

We walked all the way up a flight of stairs and back to his classroom where he promptly removed them. We considered this a pretty big win.

Later today, when I went back to pick him up, I discovered that his new shoes were back on and had been all day. I was absolutely shocked. Still am.

D has been in his new shoes for the better part of today and it’s like it’s no big deal.

8 thoughts on “Autism And Shoes”