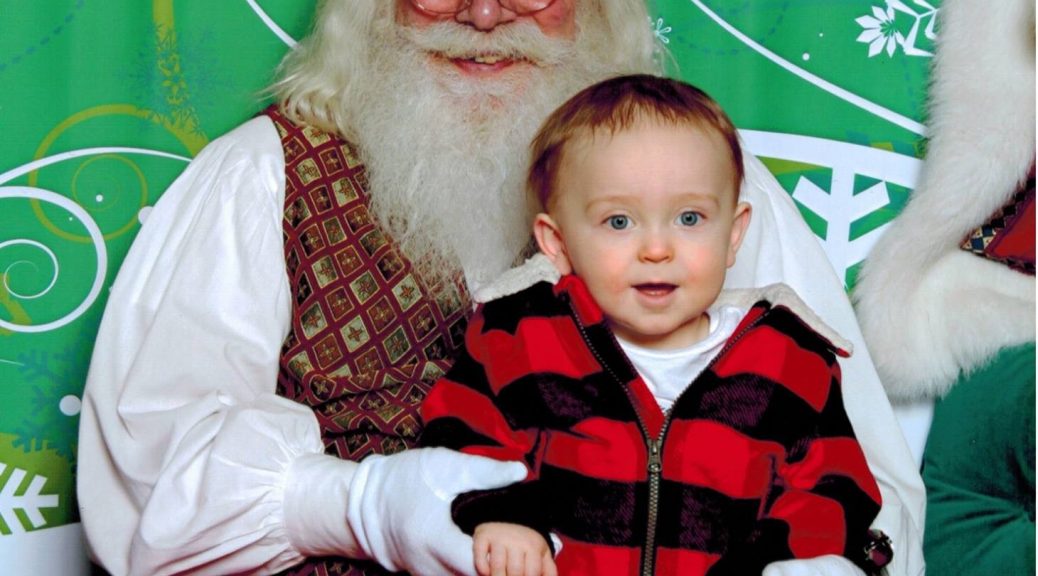 I’ve always loved both versions of Santa pictures. They’ve both got their merits and they’re both endearing. I’m sure Santa gets it, he sees each scenario regularly.

Santa Helped Us With Autism

Christmas season, 2014, my wife and I decided to take D to see Santa at the mall and have his picture taken. At the time we didn’t yet know he was autistic. He was a fairly normal, fairly engaged, present little boy. Looking back at it through perfect hindsight, it seems as though autism was staring us right in the face. Not so much at the time, though. At least for me. My wife already had inklings that something was up.

We had a couple parenting tricks that we had learned by that juncture. D absolutely loved watching videos of himself laughing. Not videos of himself eating or farting or falling asleep (we had plenty). Not videos of other babies laughing. Just himself. The ABCs were huge at that time as well (they still are, actually) and would calm him very quickly. Armed with these and I think some sort of light up toy, we bundled up and went to the mall.

We chose an off time on an off day in the hopes that we wouldn’t have much of a wait. D typically didn’t like waiting in line. He needed to move. As long as we were moving, things were good. Stopping, whether it be in a shopping cart or a car he would throw a fit.

As luck would have it our plan worked pretty well. We were able to waltz right on up and really didn’t have to wait much, if at all.

We sat D down on Santa’s lap not fully knowing what to expect. Would he look up with wonder and try to pull Santa’s hat or beard? Would he be afraid and cry? Or, would he simply not care? We just didn’t know.

It turns out that D couldn’t have cared less that he was on Santa’s lap. He just sat there. And he stared. It would have been one thing if D was asleep, but instead he just seemed like he was dazed.

We started making noises and faces to try to gain a reaction from D. Nothing. We tried calling his name, not that he ever responded to his name…but still, nothing.

One of us finally brought out a phone to play D’s favorite video – Baby D Laughing. Instantly. Instantly, he  lit up. His head lifted, his eyes brightened and he started smiling and laughing.

Santa’s helpers took D’s picture and we ended up with a happy, smiling little boy with jolly old Santa. Super cute and a nice photo to send to family and to post on social media.

That would have been the end of it had Santa not said a few simple words.

“Thank you for bringing him today.”

And Santa had kind of a knowing look…Santa knew D was… different. He saw hundreds or thousands of kids every Christmas season and just knew.

I’ll be honest. I didn’t catch on to this until Christa pointed it out. Once she did it all struck me and weighed on me pretty heavily. I didn’t care about the picture with Santa, of course. I cared about the implications of it all.

D was different. Our baby was different and I could see it. I didn’t have a name for the differences and couldn’t necessarily define all that was different but it was there and if I chose to ignore it…well, what sort of parent and person would that make me?

My mind tends to move in pretty grand leaps sometimes and this instance was no exception. Without knowing what was going on with D and no other information to go off of other than what we had noticed, I was left to battle the conclusions I was drawing in my own head.

Was this something that was a phase? What if it continued, and get worse? Would he have a shot at a normal life? Would he be a functional kid? Adolescent? Adult? Would he live with us for the rest of our lives? What would happen when my wife and I die? And on and on…

All of those thoughts barraged me in the span of moments before I was able to get a hold of myself and rationally think again. Those instants were like the culmination of a lifetime’s worth of uncertainty and doubt being manifested in my one year old son.

We didn’t yet know D was autistic but we knew that he was different. My wife put things together much quicker than I did. She was the one that saw things in D before I did and she’s the one who got the ball rolling as far as seeking interventions for him.

I am forever grateful that I have a wife who saw the differences in our boy and read between the lines with what Santa said because it was just a few months after that that we had D attending speech and OT at Fraser.

We haven’t been back to see Santa since that trip in 2014, but we will. There will be a picture of some sort with both brothers and Santa. We have since found out that more and more places are doing sensory friendly Santa set ups where they schedule blocks of time to make appointments to avoid long lines. The lights are usually a bit dimmer and it’s kept a bit quieter. It’s really incredible seeing accommodations like this being put in place and it makes me hopeful for the future of things.

We look forward to that day when D recognizes who and what Santa is and what he stands for. The magic of that moment will be incredible and I don’t think I’m prepared to gracefully handle it. For now though, D continues to simply not care. He’s very occupied with singing, shapes, letters and numbers. And you know what? That’s okay. Actually, it’s more than okay. It’s pretty damn wonderful.

Had Santa not delivered that message to us that day exactly three years ago as I finish writing this, sure, we would have gotten D in to Fraser and he would have been diagnosed, but perhaps that day acted as a catalyst to speed up the process.

With autism, early intervention is so crucial and we were able to get the ball rolling when D was 15 months old. Thank you, my incredible wife, thank you Santa, thank you everyone at Fraser. Without D’s entire team, I struggle to begin to think where we’d be today. It honestly makes me anxious to even try.

Thank you D. You are an incredible little boy. You are so hard working, so smart, funny and affectionate. It’s kind of funny, but on one hand it’s only been three years since that picture with Santa was taken. On the other hand, it’s already been three years. You can go ahead and slow down your growing up now.